In this series of posts, I document an extraordinary trip to 10 churches in the Shida Kartli region. To see the full post on the Churches of Kartli, click here. In this specific post, I share photos and video of the incredible 7th century Rkoni Monastery, and the tower dedicated to St. Simeon Stylite on the ridge above the monastery.

This trip is accessible by jeep tour only. To book your tour, contact us directly!

To reach the monastery complex, one has to pass the imposing Rkoni fortress, once the summer home of Queen Tamar, and according to legend, the site of much treasure hoarding over the centuries.

The fortress is situated at the confluence of two branches of the Tedzami river deep in a gorge sloping down the northern flank of the Trialeti mountain range in central Georgia. To find it, we drove one hour West of Tbilisi to the nearest big town of Kaspi, then south up into the hills for another hour.

Because there is no jeep access to the Rkoni monastery and medieval "Tamar bridge," visitors park at the last village and walk under the Rkoni Fortress up river along a 2 kilometer foot path.

A 17-second glimpse of the magical Rkoni forests in early spring!

But in the medieval period, the road clearly did not stop here. It continued up the gorge, past the impressive Rkoni Fortress ruin, and into the mountains.

From the top of the gorge, travelers would have found themselves in the heart of the Trialeti mountain range, from where they could access roads to the Ateni gorge, the Dzamis gorge, or to climb to the highlands of Bakuriani and Tsalka. These routes connected the Mtkvari river valley with the entire southern kingdom of Samtskhe-Javakheti, an alternative to the treacherous and dangerous track along the Mtkvari river through the Borjomi Gorge to the West. 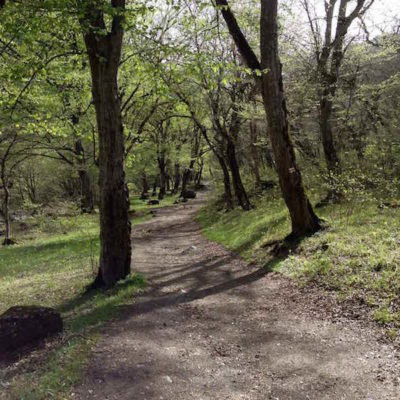 Approaching the Rkoni Monastery on foot 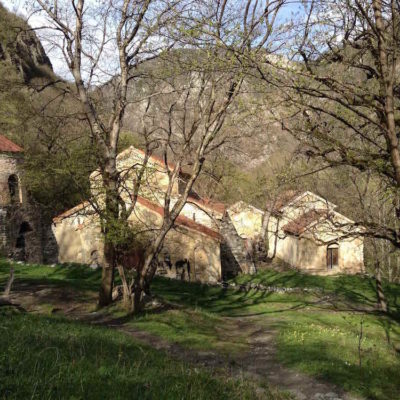 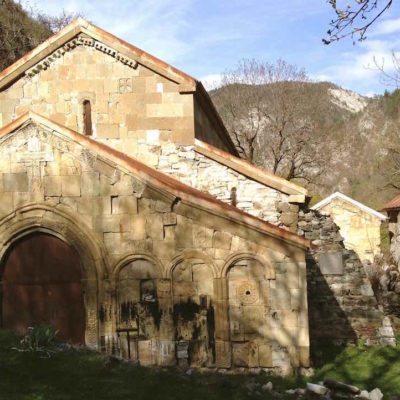 The 7th basilica dedicated to the Dormition of the Theotokos 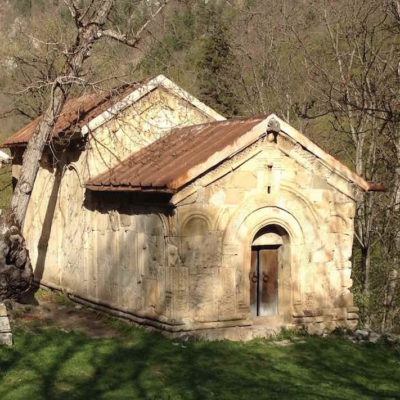 A series of extremely well built arching stone bridges were strategically constructed up the gorge in order to allow for horse and cart traffic (take a look at my parallel post about "Tamar" bridges to see video of the stunning Rkoni medieval bridge).

Approaching and entering the 7th century basilica of Rkoni!

Inside the Dormition of the Theotokos basilica, Rkoni Monastery

The Rkoni Monastery complex has many different buildings, some in half ruin. The basilica dedicated to the Virgin dates from the 7th century, and is in need of interior restoration (last received official preservation work in 1972).

Other buildings in the complex, such as the church of St. John the Baptist and the bell tower, date to a later period of construction (13th-14th century). Still other buildings are ruins from as late as the 18th century, the sheer number of such ruins suggesting that a large community of monks lived here (see plan to the right).

The basilica is normally locked to visitors because there are fears that the frescoes could be damaged, or worse, that someone could be injured by falling ceiling pieces. Also, the monastery is very remote, and does not typically have anyone there to attend to the actions of visitors. 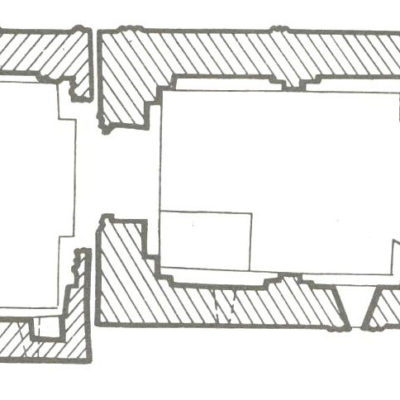 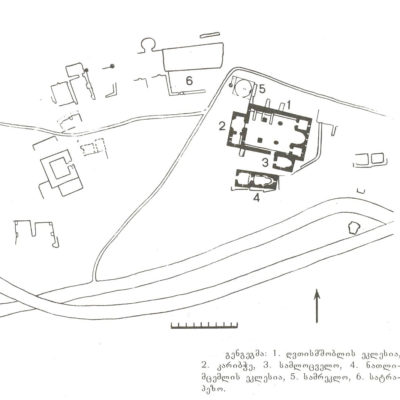 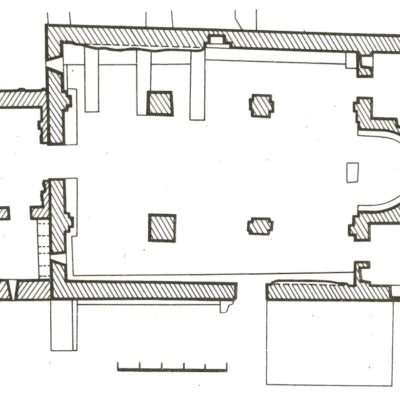 According to my friend and guide, monk Zakari, in the summer months, monks from the Kvatakhevi Monastery walk to Rkoni on Fridays (a 5 hour hike), stay overnight, and return on Saturdays. During their visit, they clean up trash, open the church, answer questions, discourage amorous behavior on the monastery grounds, and chase away any would-be graffiti artists. 🙂

It's not a perfect situation, but until there is more regular and systematic staff on site, it works.

With monk Zakari as our leader, our small group was able to gain entrance to the monastery via a secret key. Inside, we were amazed with what we found. 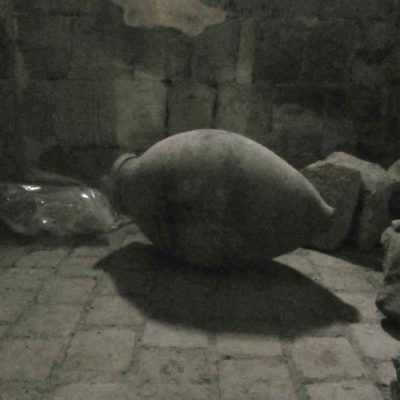 A clay qvevri for storing wine 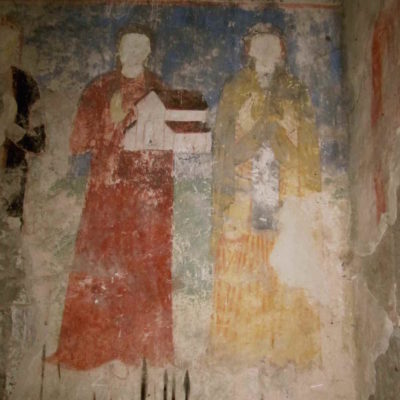 Frescoes in a side chapel, Rkoni Monastery 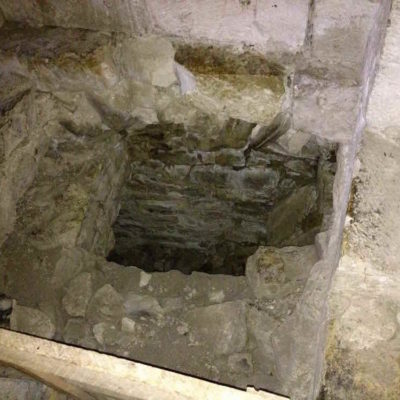 Entrance to the crypt or secret escape tunnel? 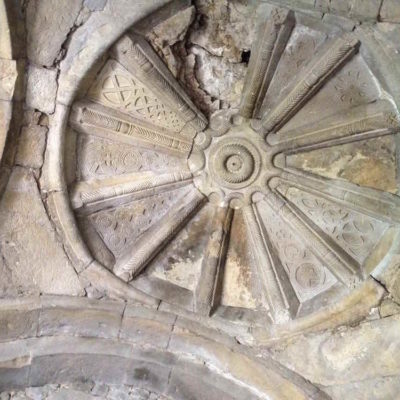 The decorative ceiling of the narthex dome

The church is basilica form, about the same size and floor plan as the Anchiskhati basilica in Tbilisi, or the Kvelatsminda basilica in Gurjaani. At least, that is what I was reminded of.

The space is clean, except for a few materials that look like they're waiting for the preservation experts: boards for scaffolding, a few ropes, etc. In one side chapel, there is an intact qvevri - the clay vessel used for storing wine. The floor is tiled with Georgian square clay tiles.

The uphill side of the Rkoni Monastery complex

There are frescoes in the two side chapels, dating probably from the 12th-13th century period, though I couldn't be sure. There are also intact frescoes on the West wall, but the sunlight coming through the single window in the West wall made it impossible for us to see those photographs, or indeed, to photograph them.

The exterior stone work suggests multiple reconstructions of the church. The ornamental stonework at the crest of the roof is characteristic only of churches from the 6th-8th centuries.

13th c. Church of St. Simeon the Stylite, near the Rkoni Monastery

After crossing the "Tamar" bridge at Rkoni, we scrambled up a steep hillside to a medieval tower, built into the hillside far above the monastery. The three-story tower is surrounded by forest.

A recently patched up wall around a narrow yard displays evidence of recent attention. Indeed, older photos on the internet reveal that the roof and first floor used to have gaping holes. Now, gratefully, the tower church has a new roof and patched up exterior walls. No one is complaining that the old wooden door to the yard, which gives so much character to the place, still hangs by one hinge in a permanently half open position (see video). 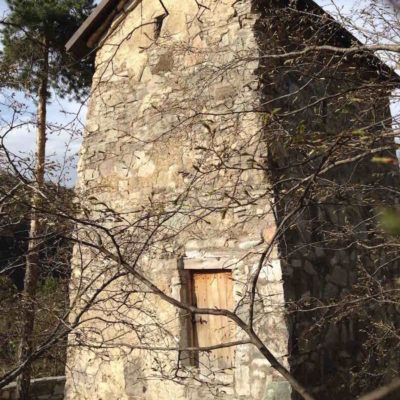 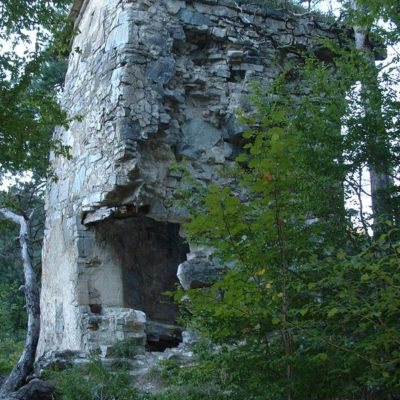 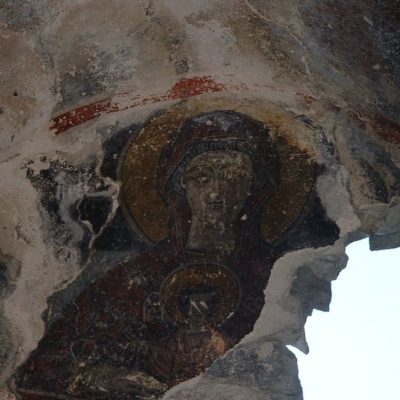 The ceiling frescoes, with gaping hole in the roof before recent repairs

Inside the tower, we climbed steps to the top level where we found original frescoes on the walls, dating back to the 13th-14th century period. Through narrow slit windows, spectacular views up and down the valley suggest that the tower church doubled as a sentry post.

On the river side, the views are spectacular: straight below and across the river, a plan view of the Rkoni Monastery spread out before us with each rooftop clearly defined against the green meadow around the monastery.

Down valley, the sun glinted off of the white limestone of the imposing ruin of the Rkoni Fortress, and up valley, the view commands several switchbacks of the tumultuous Tedzami River as it winds upwards into the forested upper canyon. Turks, even Tamerlane, are said to have come from the plateaus above, while enemies might easily come up from from the broad valleys of the Mtkvari river as well. 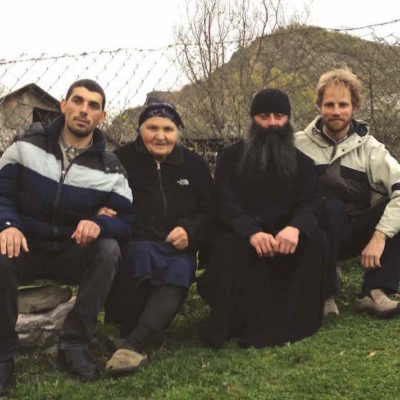 Our band, with the local village matriarch 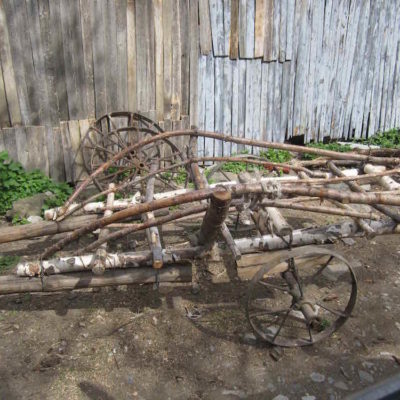 I was impressed with this ingenious firewood cart 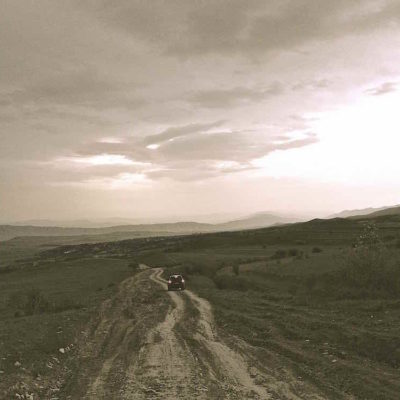 The road back to Kaspi from the Rkoni Monastery

As we returned to our car at dusk, we snapped this photo with the last full-time inhabitant of the local Rkoni village. Maybe in the future, more people will return to live in this village. There is talk of a paved road, increased economic activity from tourism, and renewed interest from local people. Indeed, a new hotel is being built in the village. 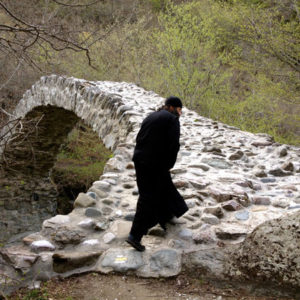 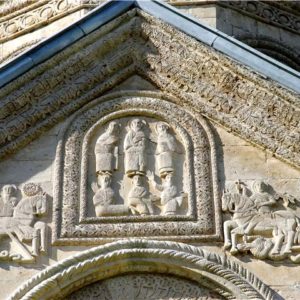 The monastery church of Nikortsminda is one of the most unique churches in the Caucasus...

The Martvili Canyon is a natural wonder in the Samegrelo region of Georgia, near the...