Yesterday, I had the fortune to sing liturgical chants with the Anchishati Choir, in the Anchiskhati Church in Tbilisi.

I had gone to the church to attend a wake for my friend’s father, who had passed away. The scene was like this: men stood around outside the sixth century stone church in small groups, talking quietly. (When I arrived, I chatted with one choir member, Gocha, and was reminded of the passage of time when he mentioned that his eldest was already 11 years old: she had been 2-3 weeks old when he and the Anchiskhati choir first came on tour with me to the United States in the fall of 2005. How time flies). Inside the church, rows of black-clad ladies were seated on either side of an open coffin, a white shroud covering the body within. There are very few windows, so the light mostly comes from the doorway, and from a few candles stuck into sand trays in front of gold icons hung on the pillars and walls. Following protocol, I walked counter-clockwise around the coffin, nodding gravely to those that looked at me, and shaking the hands of the male relatives.

As I was walking out of the church, more members of the choir started arriving, and they invited me back inside to chant. I had it in mind to go do some work, so at first I politely declined. But thank goodness my head cleared of this momentary insanity, and I marched my body right back in there. Members of the Anchiskhati Ensemble, the best Georgian chanters in the world, had just invited me, an American, to come and chant with them in this sixth century basilica!! And didn’t I first come to Georgia because of my love for this music? Sometimes I take it for granted. It’s moments like this where I need to take a step back and realize what a charmed chapter in life I’ve been living these past 13 years. 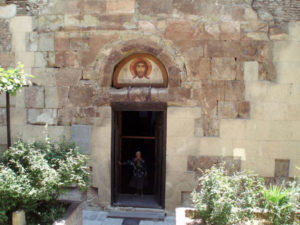 We started with the East Georgian variant of movedit taqvanis vtset (Come, let us worship). No other middle voice singers had arrived, so everyone looked at me. I know the Gelati monastery variant by heart, but not the East Georgian variant. No problem, they had notation in the choir stall, so I could read from the score. What is it like to sing in the Anchiskhati Church? Well, the acoustics are not the best in the country, but neither are they bad like most of the new reinforced concrete made churches that are springing up around the country. The sandstone blocks in the foundations date from the 6th century, though the current brick pillars and roof was rebuilt in the 17th century. The faded frescoes date to the Russian period in the 19th century. What is amazing about singing in the Anchiskhati Church is singing with this choir, with these people, with this tradition. This is where the revival of Georgian polyphonic chant began, back in 1990. For my generation of chanters, these are the hallowed halls where the most famous chant choir sings. And here I was, singing with them.

More singers arrived and we sang many many chants, including the famous theotokion hymn shen khar venakhi (You are the vineyard). This was an interesting choice because this hymn is most often associated with weddings, or at least that had been its association for the second half of the Soviet period, when this was one of the first hymns that was popularized and accepted in that period of religious cultural suppression. The words are para-liturgical, and don’t explicitly mention Christ, the Theotokos, or any other overt religious theme. Therefore, Soviet authorities apparently accepted its careful designation as a “Chorale” in the 1960s by the Rustavi Choir, who re-popularized the chant. In reality, it’s a descriptive text that is very Georgian Orthodox: it’s about the Mother of God being glorious and radiant.

Here is the translation:

You are a vineyard newly blossomed.
Young, beautiful, growing in Eden,
A fragrant poplar sapling in Paradise.
May God adorn you. No one is more worthy of praise.
You yourself are the sun, shining brilliantly.

As the choir sang, I took a short video to capture the mood (see above). This chant doesn’t fit into any specific liturgical service, but it is possibly the most well known and most popular chant in Georgian society. It is sung for weddings and joyful occasions, and indeed for funerals and moments of deep societal pathos like the 2008 war with Russia. I’ve written about this chant elsewhere here.

After singing this and many other hymns, a priest came and we began the service for the dead. About 50 people stood near the coffin, listening to the priest intoning the words, the choir responding with upalo shegvitsqalen (Lord have mercy), and tsmindao ghmerto, tsmindao dzliero, tsmindao ukvdao, shegvitsqalen chven (Holy God, Holy Almighty, Holy Immortal, have mercy on us). Outside, more than a 150 people had gathered by now, all talking away in their own small group conversations. It’s tradition to be at the wake, to make an appearance, to show respect. But it is not required to mourn. I didn’t stay for the whole service, but I know that later, after the body is lowered into the ground, covered, and the final prayers are said, many of these guests will gather around long banquet tables to break bread, stand to raise glasses of wine, and make toasts in honor of the life lived, the family members, the honor of the clan, and to tell stories and be sad, and merry, and solemn, and light-hearted, all together and at once in community. Another afternoon in the cultural life of Georgians. 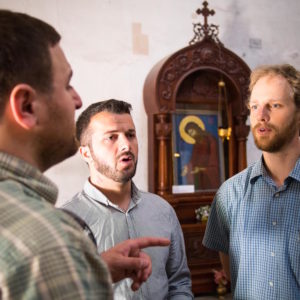 The monastery of Gergeti Sameba in the Kazbegi highlands is one of the most iconic... 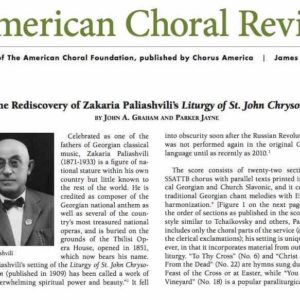 This past Thursday, a group of some 80 singers participated in a "Flash Mob" of...